I’ve promised a longer post for a bit so here it is.

Change is often difficult, but a passing philosophical glance of your life will tell you that change is the only constant within it. My boyfriend reminds me that change doesn’t happen until the discomfort of staying the same exceeds the pain of change. I think that not all change has to be painful, but often, because we crave security and assurance, it feels that way.

I ‘started’ a new job yesterday. In a painless way. I agreed to take the position last week, when I signed a paper. It means that I’ve joined the group I was temporarily working with, but for good. So not a whole lot of change there except I’m not going back to my same old position in two months’ time.

I feel excited about the new skills I’ll develop, new colleagues I’ll meet and work with, new projects I’ll get to work on. But I am sad that I won’t be seeing my other friends and colleagues very much.

Other changes that have happened. This one I’ve been reticent to say much out loud, possibly I’m still judging myself a bit. After the eating fish incident in Ireland, I came home and resumed my vegetarian lifestyle. But my body started craving fish. So I continued for months, pondering and thinking and trying to inject more plant protein into my diet. But, in the end, I have incorporated fish back into my diet. Because I promised myself I would listen to my body on this.

I still cook vegetarian most every night, but I have cans of tuna in the cupboard and uncooked shrimp and scallops in my freezer. The cravings continue, but now I am allowing myself to have a tuna sandwich instead of staunching it with whatever chickpeas I can find. I still call myself vegetarian, though that makes me “one of those vegetarians that lie”. In actuality, the technical term is pescitarian. Which I would have thought was spelled piscitarian because of piscivore. Anyways… If I was going to harken back to a post I made a while ago about labels, I would reject it and just say that I eat mostly vegetarian food but sometimes eat seafood. Delicious, delicious seafood.

This blog is almost complete. I’m coming up on my anniversary for starting my 2013 adventures. I’m still deciding what I’m going to do with it, as I have a couple of other projects that I’ve been thinking of starting. But I know there are more adventures happening soon so I might extend it’s life until the summer… 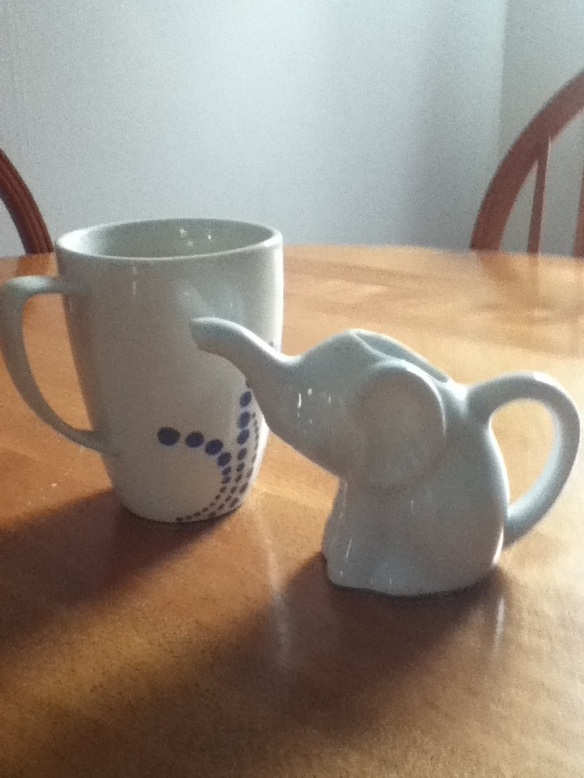 My tea mug and milker.

This cute little guy was my company as I was on a ridiculously early teleconference with my colleagues who got to be at a conference in Norway this week. It was a good meeting. And there was one way (thank goodness – no one wanted to see me like that) 360 degree video of the room, so I got to see the Arctic sunrise on the day the sun came back.

But, wow, I was physically aching with tiredness by 11am that morning.

It was a great experience, to be sure. I’m just not an undergrad student anymore, capable of pulling all-nighters and shrugging them off.

Sometimes you just gotta do what ya gotta do, though. :)

Untreated ice plus walking with your coffee equals… Sadness.

This wasn’t my coffee, but it was a signpost for being cautious – especially on my return trip to the car after picking up some things at the store. The freezing rain did do a number on the sidewalks yesterday.

I will have a more elaborate blog post a little later. Pieces have been coalescing in my head and I’m trying to bring it together.